A Woman’s Perspective: Dealing with Menopause 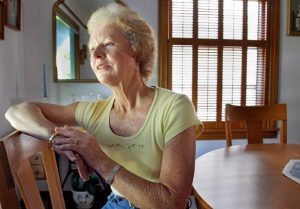 Menopause is the time in a woman’s life when the function of the ovaries cease, menstruation stops and the body goes through changes that no longer allow pregnancy. Menopause is a natural event that normally occurs between the ages of 45 and 55. Periods can stop for a while and then start again — so a woman is considered to have been through menopause after one year without periods.

The term perimenopause, meaning “the time around menopause,” is sometimes. It is not officially a medical term and is different for each woman. The term “postmenopausal” is used to as an adjective to refer to the time after menopause has occurred. Scientists are still trying to identify all the factors that initiate and influence the transition period associated with a women’s body moving through and beyond menopause.

Hormone replacement therapy (HRT) can help with moderate to severe symptoms of the menopausal transition as well as prevent bone loss and improve cognitive function. It also may have some risks, especially if used for a long time. For example, it is highly recommended that you not use HRT if you:

• have problems with vaginal bleeding,

• have had a stroke or heart attack

• have had blood clots

If you choose HRT, experts recommend that you use it at the lowest dose that helps, and use it for the shortest time needed. Dr. Elizabeth Lee Vliet, author of “Screaming to be Heard: Hormonal Connections Women Suspect, and Doctors Still Ignore,” is a one of many outspoken defenders of hormone replacement therapy as a corrective and preventive treatment, providing it is individualized and integrated with alternative therapies.

There is a new alternative nonhormonal treatment to HRT specifically for vaginal revitalization, MonaLisa Touch. Introduced with highly successful clinical trials in Italy in 2014, it is now offered in the United States by a select group of trained medical practitioners, myself included. The procedure is both nonsurgical and nonpharmacological. It uses a fractional laser in a painless, safe manner to prevent or resolve, or both, changes in the vaginal tissue that occur during menopause. The procedure creates microscopic changes in skin thickness, collagen matrix, blood supply and elasticity — all resulting in induced healing with improved vaginal health and revitalization. It is painless and quick (approximately 10 to 12 minutes a treatment with typically three treatments recommended), and patient symptoms of dryness, itching and pain with intercourse are relieved within weeks of treatment. Of note, research and clinical trials are now underway to determine if fractional laser therapy can relieve mild stress incontinence and vulvar skin conditions.

With nearly 46 million women between the ages of 50 and 80 in the United States, here are menopause facts every woman should know:

• The process of menopause does not occur overnight, but rather is a gradual process. This so-called perimenopausal transition period is a different experience for each woman.

• The average age of menopause onset is 51 years old, but menopause may occur as early as the 30s or as late as the 60s. There is no reliable lab test to predict when a woman will experience menopause.

• The age at which a woman starts having menstrual periods is not related to the age of menopause onset.

• Complications that women may develop after menopause include osteoporosis and heart disease.

• Given the importance of the brain as a target organ for estrogen, it is not surprising that many of the complaints that prompt women to seek treatment related to menopause are neurological in origin.

Basic neuroscience has a great deal to contribute to the clinical issues surrounding estrogen, menopause, the aging brain, and brain connectivity. For example, sometimes women going through menopause feel as though their brains are getting fuzzy. Today, neuroscientist are researching whether this is because of sleep deprivation (due to such things as night sweats) or because of a loss of neuronal pathways due to a lack of estrogen.

Treatments for alleviating the uncomfortable or distressing symptoms and possible complications of menopause should be customized for each woman.

Correction: In La Follette’s column in the June 8 Plus section, she recommends finding a health-care institution and provider that make low C-section rates a priority for first time, low-risk pregnancies, ideally 20 percent, not 2 percent as reported.

Dr. Lizellen La Follette is a board-certified obstetrician and gynecologist in private practice in Greenbrae. Her A Woman’s Perspective column appears every fourth week in the Journal during these 3 years.