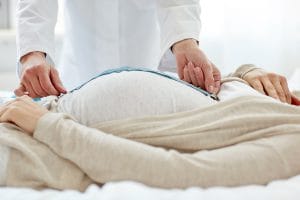 The PreTRM testing procedure is a new blood test that will help you determine your risk of delivering prematurely. Most women think having a premature baby will never happen to them, but it can happen to anyone, even the healthiest woman. With PreTRM, Your blood is tested during your 19th or 20th week of pregnancy, which detects protein levels in your blood that are highly predictive of premature birth. Knowing you are at risk of delivering your baby too early gives you time to plan and prepare for a potential premature delivery.

Do I need PreTRM testing?

Traditional methods to predict premature birth, such as measuring your cervix or your previous history of a premature baby, fail to predict the vast majority of women who will deliver their babies prematurely. This means that these women are not getting the extra care that could help them.

For many women, knowing that your baby may deliver prematurely gives you and your doctor the power to prepare and get extra care for your pregnancy with the goal of having a healthy baby.

This is especially true for women who:

If you know you’re at increased risk, your doctor and you can address it early and create an individualized plan that could include, but is not be limited to, more frequent visits with your La Follette OB-GYN MD in Greenbrae, and seeing a high-risk pregnancy specialist (Maternal Fetal Medicine).

How accurate is the PreTRM test?

The PreTRM testing procedure measures proteins in the blood that are highly predictive of babies being born prematurely. The PreTRM test is predictive of preterm delivery in women pregnant with a single baby when blood is tested during your 19th or 20th week of pregnancy and has reported “spontaneous* premature birth prediction” Area Under the Curve (AUC) ranging between 0.75 and 0.935, where a 1.0 score is “perfect” and a .50 score is the same as chance.

The test’s accuracy was rigorously validated in a large clinical study involving 5,500 women in 11 obstetric centers across the U.S. The test validation study was published in May 2016 as the “Editor’s Choice” lead article in the American Journal of Obstetrics & Gynecology.

What does the PreTRM test result mean?

The PreTRM test gives you a percentage risk of delivering before 37 weeks, comparing your personal risk to the average risk of all women pregnant with a single baby. The result of the PreTRM test is not a positive or negative (yes or no) result but an “individual risk prediction” of having your baby too early.

If you are shown to be higher than average risk for all pregnancies, which is 7.3% for Spontaneous premature birth for all women pregnant with a single baby, there are established treatments that you and your doctor can consider to address your risk.

After a PreTRM test, you will have necessary information so that you can plan and be prepared for a potential early delivery. It’s important to prepare physically and emotionally.

Get tested in Northern California

A blood test is ordered for testing in your 19th or 20th week of pregnancy. Results should be back within 2 weeks. Complete our scheduling form to request an appointment to get tested. We help women in Northern California, San Francisco & the East Bay, Marin County, Sonoma County, Napa and the surrounding areas.

Is PreTRM covered by insurance?

Since the PreTRM test is newer to the marketplace, it is not covered by insurance at this time.

Great! Lizellen takes her time to discuss whatever concerns you have, of which she always has very informative answers to, and explain your test results in a way you can understand. The biggest thing is she listens to you, is open to doing further research and action on your issues, and has great communication during and after your appointment.