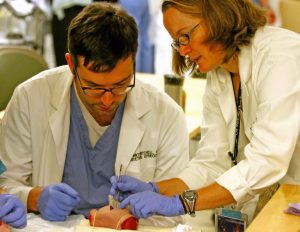 As an obstetric provider, my belief is if your first delivery is vaginal then all subsequent births are made easier. Because that first birth can be long and arduous, there has been a trend to help hasten the process. While we live in a time where patience and attention spans are getting shorter and shorter, I suggest that once a women is in labor, time loses all meaning — and attempting to expedite this natural process comes at a cost.

Efforts traditionally used to shorten the second stage of labor (pushing) include the episiotomy — an obstetric procedure in which a surgical cut is made at the vaginal opening. The procedure was made popular in the 1920s and ’30s when it was believed (now mostly unsupported), that in making a cut to enlarge the perineal/vaginal opening, you assisted in getting the baby out quicker and “protecting” the mom’s anatomy from further injury. History shows that we often rediscover things our ancestors knew. In fact, obstetric literature from the early 1700s suggests today’s recommendation focused on slow, controlled pressure on a women’s perineum during delivery was the norm at that time.

Midwives have continuously questioned the use of episiotomy over the years, and made doctors realize the procedure’s limited use. Despite its advertised “protection of women’s anatomy,” most studies have shown that once you make an incision, you have created a weakness in the integrity of the skin and muscles that, in fact, allows for greater injury and more extensive lacerations. Instead of protecting women’s anatomy, routine use of episiotomy does the reverse and makes larger and deeper lacerations more likely.

Clinical trials in 1981 in London questioning the use of the episiotomy as a procedure found it frequently led to even deeper tears during delivery, leading to a host of subsequent problems — and episiotomy rates began to see a decrease. By 2006 the American College of Obstetricians and Gynecologists (ACOG) recommended against routine episiotomies as “standard of care.” Since then, rates of the procedure in vaginal birth have significantly declined. Northern California hospitals routinely have rates close to 2 percent to 3 percent and are falling.

There’s no guarantee a women will not have an episiotomy during delivery. In rare instances, doctors have to perform the procedure — for example, when the baby shows signs of distress with an abnormal heart rate and needs to be delivered quickly. Sometimes, too, the baby’s head is too large for the vaginal opening, or its shoulders get stuck in the birth canal. A doctor’s final decision to use an episiotomy is made in the delivery or birthing room when your baby’s head is crowning.

The good news for moms-to-be is today’s declining episiotomy rate means their recovery time will be faster with less pain and fewer complications.

To minimize the chance of having an episiotomy, all pregnant women should:

• Talk with your provider. Let him or her know you’d like to avoid having an episiotomy if at all possible and include this statement in your birth plan. Ask for the plan to protect you and your perineum during the delivery of the baby’s head. Ask about warm compresses/counter pressure and perineal massage before delivery and during delivery.

• Find out your hospital’s episiotomy rates. Those with the highest rates perform the procedure significantly more often than hospitals with the lowest.

• Do kegels. Throughout a pregnancy, kegel exercises are important for flexibility and control.

Dr. La Follette is an absolute sweetheart. She has a very polite and professional bedside manner. Check ups with her are not awkward at all.