A Woman’s Perspective: It’s Never Too Late to Plan to Age Well 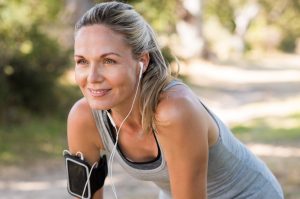 When 19th-century English poet Robert Browning wrote the now well-known verse “Grow old along with me! The best is yet to be,” the average life expectancy at birth in Britain was 47 for a man and 50 for a woman. Today, the average life expectancy is 79 for a man and 83 for a woman, a result in part from dramatic long-term improvements in public health, clean water, living standards, and nourishment guidelines.

What will it take for most of us to “age well” in the 21st century? How does one grow old gracefully today? What behaviors and lifestyles translate into healthy longevity? We all know exercise and diet play a key role, but most of us don’t realize that changes in attitude and lifestyle are just as important — perhaps more so.

For certain, everyone has genes that influence longevity, but the number of good and bad longevity genes tends to average out — making it reassuring to know it’s never too late to change our behavior or take actions to improve our prospect for healthier senior years.

Studies reveal that many ingredients of longevity are predictive and within our control, such as exercise — do regularly; weight gain — eat correctly; smoking — stop; good coping and adjusting skills — make lemonade out of lemons; education — pursue, and relationships — build.

• A positive attitude. Over the past 20 years, numerous studies from neuroscientists, psychologists and medical doctors, and have shown that older people with more negative views on aging fare more poorly in health than those with less-pessimistic attitudes. Research published in the Journal of the American Medical Association shows a negative “getting older” stereotype can become a self-fulfilling prophecy, and that an improved mindset can boost a person’s well-being. Seniors who think of age as a means to wisdom and overall satisfaction are more than 40 percent more likely to recover from a disability than those who see aging as synonymous with helplessness or uselessness.

Of course, negative things (subjective and not) do happen to our bodies as we age. We may not be the athlete we once were. Adapting and find other outlets with similar positive payoffs is key. Remember, too, that laughter relaxes muscles and releases “feel good” chemicals that improve mood and health. Studies show laughter helps protect the heart.

• A focus on what and how much to eat. It’s commonly recognized that overeating contributes to shorter life span, cardiovascular disease, and type 2 diabetes. A low-glycemic diet of fresh fruits and vegetables, whole grains, lean protein, fish, nuts, even red wine (in moderation) — coupled with cutting back on salt — play a key role in warding off heart attacks and strokes. Recent studies suggest rosemary, kale, and anchovies enhance longevity and that walnuts, salmon, and flaxseed help skin manufacture oils for protecting itself.

• A lifestyle with regular exercise and daily walking. Resistance workouts and walking a specific amount on a daily basis not only help increase muscle mass and strength but also help reduce the risk of various illnesses. Staying fit has been shown to reduce age-related memory loss — and to strengthen the hippocampus, the region of the brain associated with learning. With Alzheimer’s disease accounting for approximately 60 to 70 percent of dementia cases, studies show a specific increase in physical activity decreases this statistic by 25 percent.

• A center of mental activity and interest in passing on nuggets of learning. According to the National Institute of Health, a key component in aging well is having an ongoing interest in learning something new or interest in passing on what has been learned to others. Individuals are more adept at recognizing and solving everyday problems as they get older. When focused on imparting knowledge, curiosity, and creativity, people thrive in mentally alert environments where educational activities and learning exchanges are present.

• A social network. Individuals who have strong social connections and ties, and who spend time with positive people, are shown to have a 50 percent higher chance of living longer and stronger disease-fighting immune systems than those with poor or insufficient relationships. Whether our connections are with bridge partners, siblings, close friends, a spouse, or offspring, they’re crucial to remaining alert and staying emotionally and physically healthy while growing older.

While it is true, as we age we lose some of the social connections we had at one time, there are ways to expand our social network, including joining clubs and organizations based around our passions and participating in communication outlets like Facebook and Instagram. On the island of Ikaria, off the coast of Turkey, residents live profoundly long and healthful lives, reaching the age of 90 at 2½ times the rate Americans do. Scientists suggest many reasons but one is the pervasive, long-term, connected “us” feeling of its residents.

• A time for meditation. Evidence shows meditation brings a variety of health benefits, including lower blood pressure. Ten minutes a day has been shown to help one feel more centered.

• A sun protection plan. After a few minutes of sun, our skin stops making vitamin D and starts making skin cancer — wrinkles, too. Sunblock, such as zinc oxide and titanium dioxide, is highly effective in protecting against both UVA and UVB rays, the types of UV radiation that cause skin cancer. You can get vitamin D by taking a supplement or eating more salmon and eggs. Studies at the Buck Institute for Research on Aging suggest 2,000 to 5,000 IUs daily of vitamin D.

• A seven- to nine-hour sleep plan. Lack of sleep can lead to heart disease, diabetes, and a higher risk of obesity. Chronic lack of sleep adversely affects the brain’s function and speeds the aging process. During sleep, your body releases a growth hormone that helps restore collagen and elastin, the essential building blocks of healthy skin. Studies increasingly show that naps during the day can improve memory.

• A stress management plan. Stress can cause headaches, muscle pain, sleep problems, and contribute to depression and other psychological disorders. Stress also may cause us to adopt unhealthy lifestyle choices such as smoking and drinking. Aging well results from adopting behaviors that help us deal with stress, such as going for a walk, watching a funny movie or listening to music — it has not only been shown to help individuals feel calmer and face stressful situations better but been shown to act as a cue to more vitality.

• Age well. Take responsibility now for your health and happiness. The choice is yours to make, and actions are yours to take. Remember achievements can happen at all ages. Goethe wrote “Faust” shortly before his death at 99, John Milton wrote “Paradise Lost” at age 57, Ludwig Von Beethoven composed his Ninth Symphony in the fifth decade of his life and Grandma Moses began painting when most people retire!

Lizellen takes the time to really check in and listen. She cares about her patients professionally and personally. I feel absolutely comfortable speaking with her about any issues. Her front office is courteous and they run on time!