A Woman’s Perspective: Secrets to Staying Fit While Pregnant 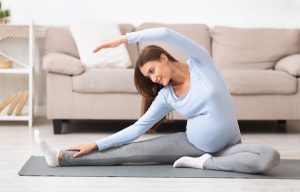 The American College of Obstetricians and other experts in women’s health agree: a pregnant woman can safely do 30 minutes of moderate exercise five days a week, as long as she has the go-ahead from her health care provider.

The truth is, if there is nothing limiting a woman’s ability to exercise throughout her pregnancy,  it is not only safe to do so — it is advised, as it often assures a shorter, easier, less complicated labor, as well as a quicker postpartum recovery period. Studies have shown exercising throughout pregnancy contributes to a leaner baby (possibly helping the child stay lean in life), and decreases common pregnancy discomforts like nausea, food aversion, backaches, stress, and fatigue. Further, new data show exercising during pregnancy helps to prevent gestational diabetes (diabetes that develops during pregnancy).

Without any doubt, pregnant women should discuss a suggested level of exercise and activity routine with their health care provider — one that won’t put mom or baby at risk. If mom has been inactive, even five minutes a day of exercise is a good start. She should add five minutes each week until she reaches 30 minutes. The good news is pregnant women are generally more careful about their changing bodies, and those who exercise usually have fewer injuries while pregnant.

Health care providers generally recommend these activities during a woman’s 40 weeks of gestation: swimming, walking, indoor stationary cycling, step or elliptical machines, yoga and Pilates, and low-impact aerobics. Pregnant women doing yoga are usually advised to not stay in one position very long — to avoid potentially reducing blood flow to the heart and uterus, pooling of blood in legs, and lowering blood pressure.

Pregnant women are usually advised to avoid doing Bikram yoga or “hot Pilates,” too — because these activities (as well as lounging in saunas or hot tubs) could in theory raise a pregnant woman’s core temperature to unsafe levels. The reality about studies of exercise in pregnancy is that pregnant women dissipate heat at a lower core temperature to avoid overheating. Nonetheless, most would continue to avoid extremes of heat — as this has not been fully studied.

If determined that there are no possible pregnancy risks or complications to mom or baby, most experts agree that exercising activities such as jogging can be done throughout pregnancy — especially if done by the woman before she was pregnant. Sports often suggested to avoid during pregnancy are those that involve lots of contact (like soccer, basketball, and volleyball), as well as those that might throw a pregnant woman off balance and cause a fall — such as horseback riding, surfing, water skiing, gymnastics, downhill skiing or mountain biking. For certain, a sport that all pregnant women are advised to avoid is scuba diving — babies in the womb aren’t protected from pressure change effects; normal development could be compromised.

It is interesting that a woman extracts oxygen much more efficiently when pregnant, as well as dissipates heat at a lower core temperature. It is also interesting that perceived exertion — not heart rate — is the touchstone for exercising when pregnant. The vital key when exercising for pregnant women is to: “listen” to their bodies; not exercise until exhausted; and stop if something hurts.

Women can definitely compete at high levels when pregnant — with the approval of their health care provider (who makes the decision based on pre-pregnancy training, exercise comfort and endurance levels; years as an athlete; health history; and perceived pregnancy risks). Actually, the list of professional athletes who have competed while pregnant is long and includes Olympic medalist Dana Vollmer, who swam the 50-meter freestyle at a national meet this year while six months pregnant; Serena Williams, who won her seventh Australian Open title this year shortly after finding out she was expecting; beach volleyball player Kerri Walsh Jennings, who at five weeks pregnant won her third gold medal at the 2012 London Olympics; Canadian curler Kristie Moore, who took home a silver medal at the 2010 Olympics while five months pregnant; and Alysia Montaño, who while eight months pregnant ran the 800-meter race at the 2014 U.S. Track and Field championships.

Most pregnant women are not professionally trained athletes and have little interest in competing while pregnant, but many will want to continue their pre-pregnancy exercise routine; others will be starting an exercise routine for the first time. Like the professional athletes mentioned above, each will need to listen to the advice provided by their health care practitioners, participate at an exercise level most comfortable for them, and listen to their own bodies.

Most pregnant women with pre-pregnancy routines in place will be advised by their practitioner to make an initial adjustment of cutting the time at which they exercise at high intensity — or decreasing the intensity and continuing for as long as they usually do. Over time, with the net training effect from pregnancy (one gets in better shape as you progress in pregnancy as it takes more work to do the same exercise), a pregnant woman will be able to add back intensity or duration.

Physical changes during pregnancy bring additional demands to a woman’s body. Hormones cause ligaments that support joints to stretch, increasing the risk of injury; the developing baby and other internal changes require more energy; extra pounds put stress on joints and muscles in the lower back and pelvic area, and uneven distribution of weight causes the center of gravity of the body to shift. Here are some basic exercise guidelines all pregnant women should follow:

• Warm up to prepare muscles and joints for exercise and to increase heart rate slowly. To warm-up, you might want to start the activity at a low intensity and slowly increase it during the first five to eight minutes.

• Drink lots of water before, during, and after workouts. There’s no official medical recommendation on how much water a pregnant woman should drink while exercising, but women should check the color of their urine. If it is dark yellow, this is a sign of dehydration. One or two glasses of water every hour should be drunk until the color is pale yellow — or just about clear.

• Consume enough calories to meet the requirements of your pregnancy and exercise level. If a woman’s body mass index (BMI) is between 18.5 and 24.9 (the healthy range) she will need to eat about 200 to 300 more calories a day in the second trimester than before she was pregnant; possibly more in the third trimester. If underweight or overweight, adjusting calorie levels will usually be required by her health care provider. Target weight gain is related to beginning BMI. Thinner women can gain 20 to 30 pounds; heavier women less than 10 pounds.

• Try to rest after exercising for the equivalent amount of time that you exercised. • Skip exercising if sick.

• To quickly cool off — stop exercising, take off layers, go someplace with air-conditioning or step into a cool shower.

• When the workout is over, walk in place for five to 10 minutes and do some light stretching to prevent sore muscles, improve flexibility and get the heart rate back to normal.

How soon can a woman exercise after delivery? Although many women are eager to get back in shape quickly after childbirth, returning to pre-pregnancy fitness routines is usually gradual. It is best for a woman to ask her health care provider how soon she can begin her specific exercise routine — as her provider knows her medical history and exercise routine (pre-pregnancy and during pregnancy). Most women can safely perform a low-impact activity one to two weeks after birth.

Lizellen is such a great doctor. She is so supportive, easy to talk to and I feel really comfortable with her. I would refer her to any one of my friends.