A Woman’s Perspective: What You Should Know About Vaginal Birth After C-Section 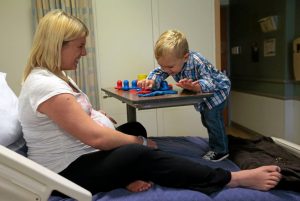 In my ob/gyn practice I am often surprised by what women have been told about their bodies. Among patients of reproductive age, there is one myth that is especially rampant: That if a woman has had a C-section birth, all of her babies must be born the same way.

It is widely thought that a vaginal birth after Cesarean delivery (VBAC) is unsafe, because of the risk of uterine rupture along the scar line. But in an overwhelming majority of cases, nothing could be farther from the truth.

Our bodies heal well from surgery, and the uterus offers the most impressive example. Toward the end of a woman’s pregnancy, the lower segment of the uterus — where the Cesarean incision is typically made — stretches out like a balloon. It’s so paper-thin the ob/gyn has to be careful not to nick the baby’s skin with her scalpel. After delivery the uterus contracts to its original shape, and just a few months later there isn’t any evidence of weakness in the uterine wall.

The risk of complications with a VBAC is less than 1 percent (similar to the rate of other obstetric emergencies, like cord prolapse) — and five years ago, the American Congress of Obstetricians and Gynecologists deemed VBACs safe for most women. Yet, according to a new government report, among women who underwent a Cesarean for a previous birth, 90 percent have a repeat C-section, despite the longer recovery time and higher risk of infection.

Finding providers who allow trial of labor after Cesarean can be a challenge. If you want to try for a VBAC, you need to make certain all of the various physicians who could end up caring for you — from your ob/gyn to the other doctors in her call group to the hospital personnel on multiple 12-hour shifts — are committed to supporting you through your labor.

I have been performing VBACs for 23 years. Here are a few observations and tips from my experience.

• If you need to be induced, you can still have a VBAC. In an ideal scenario, you would go into spontaneous labor before 41 weeks. But if that doesn’t happen, don’t give up hope. Labor can sometimes be induced.

• Conditions must be right. Near the end of your pregnancy, your doctor will check to see if your baby is a normal size and that there is an adequate amount of fluid in the amniotic sac. Once you are in labor, there will be an assessment that the baby is fine and getting enough oxygen by fetal monitoring.

• Try to make sure you’re in labor before you go to the hospital. Even though you may be having contractions, it’s possible your cervix hasn’t begun changing yet. If you arrive too early at the hospital, you may be sent home. Consult your doctor often, and if need be, go to your doctor’s office to get checked. Once you are admitted at the hospital, an operating room must be kept available for you until the baby arrives.

• Your labor may be slower than you expected. New guidelines used by most institutions consider a woman to be in active labor once her cervix has dilated to 6 centimeters (as opposed to 4 centimeters). As a result, it can take up to 20 hours to reach this phase. But remember: in labor and delivery, all-time ceases to make sense. Let the process happen on its own schedule — and trust your provider.

Your odds are good. The American Congress of Obstetricians and Gynecologists estimates that 60 percent to 80 percent of VBACs are successful.

On occasion, the three Ps of labor — presentation (fetal position in the birth canal), power (the strength of contractions) and pelvis (the structure of the bones) — don’t work in a woman’s favor. If you end up giving birth by Cesarean, don’t be discouraged. Life is not always predictable. The point is you tried, and you and your baby are safe — and that is the outcome we all want.

A knowledgable and genuine Doctor with the warmest heart.