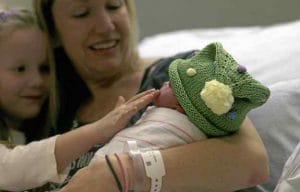 Although the United States spends more on health care than any other country in the world, more than two women die every day during childbirth, making maternal mortality the highest in the U.S. compared with 49 other countries in the developed world. Studies show the U.S. maternal mortality increased more than 26 percent from 19 (per 100,000 births) in 2000 to 24 in 2014. Today, U.S. maternal mortality ratio is roughly 26 (per 100,000 births), with California continuing to show a declining trend, and Texas the highest number of pregnancy-related deaths (not only in the U.S., but the entire developed world).

In California, where more babies are born than in any other state (approximately 500,000 a year — one-eighth of the U.S. total) — the California Maternal Quality Care Collaborative (CMQCC) is continuing to take a leading role in adopting new practices to reduce maternal mortality risks as well as life-threatening complications and racial disparities in obstetric care. Run as a collective and directed by Dr. Elliott Main, a visionary practitioner and professor of obstetrics and gynecology at Stanford and the University of California-San Francisco, CMQCC provides doctors and nurses with recommendations and toolkits to help improve procedures and safety protocols for obstetric emergencies, including hemorrhage and preeclampsia, the most common causes of U.S. maternal mortality (along with heart disease) and the most preventable.

The toolkits and focus on common serious complications of pregnancy are working: Maternal deaths in California fell to around 7 per 100,000 births by 2013, and today the state’s maternal mortality rate is about a third of the American average. The collective has inspired the American College of Obstetricians and Gynecologists and a few other states to create their own maternal health initiatives.

Because race, location, age and financial status contribute to how maternal mortality affects women in the U.S., it is important that all women of reproductive age be informed on ways to adopt healthy lifestyle behaviors and be encouraged to seek early and continuous prenatal care to prevent pregnancy-related complications and death. An increasing number of women have chronic health conditions such as hypertension, diabetes and chronic heart disease that put them at higher risk of pregnancy complications.

The most severe complications of pregnancy, usually referred to as severe maternal morbidity (SMM), affect more than 50,000 women in the U.S. every year. Based on recent trends, SMM has also been steadily increasing — most likely driven by a combination of factors, including pre-pregnancy obesity, increases in maternal age, pre-existing medical conditions and cesarean delivery. SMM results in wide-ranging consequences, including higher health service use, extended hospitalization stays, higher direct medical costs and long-term rehabilitation. Ongoing research of SMM by the Centers for Disease Control and Prevention and medical practitioners is providing more doctors the opportunity to identify additional interventions for quality improvements in maternal care and effectiveness.

It’s reassuring to know that our state continues to be one of the safest states for childbirth in the U.S. Still, 700 to 900 women die from pregnancy or childbirth-related causes ever year in the U.S., and some 65,000 nearly die. Many hospital protocols and approaches nationwide still need to become quicker and more pragmatic in dealing with and addressing potentially fatal maternal complications and emergencies, and barriers limiting women’s access to maternal health services must continue to be identified and addressed.

Dr. La Follette is amazing! She has an incredible bedside manner that immediately made me feel at ease. I would recommend her to anyone!